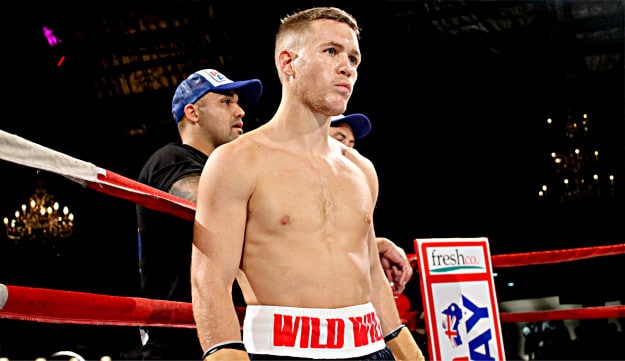 WHEN Australia’s own ‘Wild’ Will Tomlinson steps through the ropes at an illustrious MGM Grand Garden Arena in Las Vegas on March 8th, it will mark yet another milestone achieved in what is already a decorated pugilistic career that has seen the Bairnsdale-born product rise through the amateur ranks, before turning professional where state, national, regional and world title honours have all found their way onto the Tomlinson mantlepiece.

“It’s amazing, you know,” says Tomlinson. “It’s been a dream come true. I’ve worked very hard for a very long time – and to finally be here – it’s something else.”

“I’m signed to the biggest promoter in the world with Golden Boy Promotions,” he continued. “To have my name signed onto a roster next to guys like Canelo (Alvarez) and Mayweather, it’s an overwhelming feeling.”

Tomlinson, 27, has had designs on making the well overdue move abroad to the US for quite some time. While the move was initially announced post-fight, following a hard twelve round tussle with South African Malcom Klassen last May, it has taken a little while longer for Tomlinson to finally get the green light – and the three year VISA – he has longed for, for many months on end.

“There were some restless nights.” admits Tomlinson. “Waiting for the VISA and getting all the paperwork out the way, it was incredibly frustrating. I just want to fight, but I realise there is a lot more behind the scenes that goes on and I needed to wait for the wheels to eventually be in motion.”

The frustrations that Tomlinson speaks of were highlighted in the past week, when the International Boxing Organisation (IBO), the affiliated sanctioning body that Tomlinson had held their version of the super featherweight world championship for eighteen months and three title defences, stripped the Australian due to inactivity despite it being just over nine months since Tomlinson has last defended his title.

“It’s hard, it really is.” a clearly frustrated Tomlinson stated. “I trained so hard for that title, I went to war with Alan Herrera for that belt, I literally bled for it. They say blood, sweat and tears go into winning a world title and I can attest to that.”

The reality is that while he may have lost his coveted world title belt without losing a professional prizefight, Tomlinson sits in a lucrative position, with lofty top-ten rankings with all four of the major governing bodies (WBC/WBA/IBF/WBO)- meaning Tomlinson is literally a phone call away from the major leagues.

The start of this new journey begins on March 8th, when Tomlinson makes his US debut under the bright lights of the MGM Grand, where he fights Jerry Belmontes (18-3, 5 KOs), a talented trickster from Corpus Christi, Texas, who will attempt to give Tomlinson all the can handle. They will fight on the undercard of the first pay-per-view card of 2014, a collision between highly-rated Mexican’s Saul ‘Canelo’ Alvarez and Alfredo Angulo.

“He (Belmontes) isn’t the kind of guy I wanted first up, but I understand the process.” said Tomlinson. “I need to put this guy away, he’s never been knocked out and I’ll make a statement when I’m the first one to do it. I treat every fight the same, so Belmontes will know he’s in for a fight.”

Tomlinson, who boasts an undefeated record in twenty-one fights (21-0-1, 12 KOs) will also be fighting under a new trainer. Since making the move abroad, Tomlinson has been training with Manuel Robles Jr, a respected but highly underrated trainer, who the Australian believes will take him all the way to the top.

“It’s a great gym and Manny has a gym that is one of the most underrated in this area.” said Tomlinson. “I’m training alongside guys like US Olympian Terrell Gausha and Chris Van Heerden. These guys push me to take it to that next level – I couldn’t have asked for a better gym.”

“It’s one fight at a time, but I know what I’ve signed up for,” closes Tomlinson.

Social media reacts to ‘one of the worst calls ever’