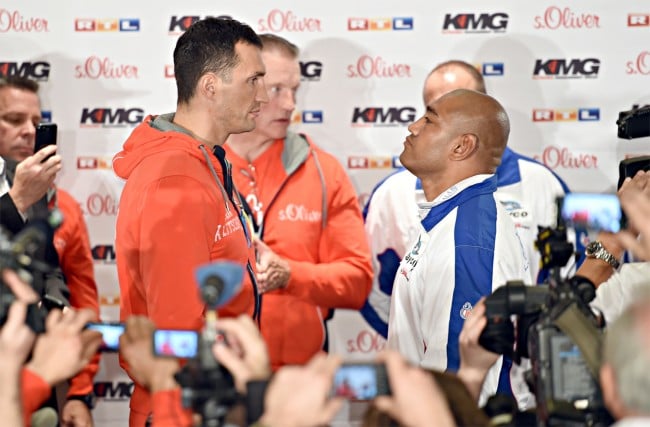 It is the second time this week the 42-year-old has hijacked an event for the Klitschko vs. Leapai fight, as officials swiftly removed Briggs before any further trouble was started. Briggs, who briefly held the WBO heayvweight title, has previously fought Wladimir’s brother Vitali Klitschko and spent time in hospital following the contest, which the Ukrainian won by a one-sided points decision.

After interrupting the weigh-in at a shopping mall in Muelheim near Dusseldorf, Brigg shouted: “I have the age, the experience and the power” adding that Klitschko was avoiding him.

Both fighters tipped the scales looking primed for what should be a competitive and compelling title fight, with the defending champion Klitschko hitting the scales at 112.2 kilograms (247.4 lbs) and the challenger Leapai weighing-in at 112.5 kilograms (248.0 lbs).

“We thought if he (Leapai) came in at 110 kilograms he’d be a little bit dehydrated, but at 112 his fluid levels are up nicely,” said Noel Thornberry, Leapai’s trainer.

Despite initial rumours of a shoulder injury, Thornberry is adamant the sore shoulder Leapai was nursing earlier in the week will not be an issue in the fight.

“The shoulder is not a consideration at this point in time, it just needed a little bit of a rub,” he said.