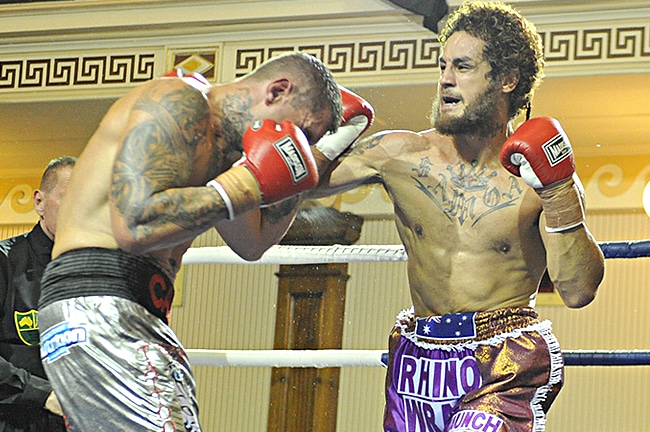 HARD hitting prospect ‘King’ Dane Mulivai has been given the task of dethroning undefeated Australian super middleweight champion Jake Carr, a fighter who is arguably one of, if not, the leading prospect in Australian boxing at the moment.

But if you ask the combat sports all-rounder, who has fought in the paid ranks as a kick boxer, mixed martial artist and professional pugilist all in the last twelve months, it’s just another day at the office.

“Jake has fought some big names and obviously that’s what scared everyone in the division, but not me,” said Mulivai in an exclusive interview with Aus-Boxing. “His team are confident in his ability so they’re out there and ready to fight whoever, I’m excited.”

“Going into this fight – I am confident – I’m a confident guy and because I know it takes one punch from me to land and the fight is over.”

Mulivai, 30, who is unbeaten as a professional boxer has proved that it only takes one punch to turn things in his favour. His unbeaten record (4-0, 4 KOs), boasts nothing but knockouts in a budding professional resume, which tells the tale of a fighter who has the ability to end proceedings with a single punch.

“As an amateur, I was unknown before the Commonwealth Games in 2010. I came into the game like a thief in the night and stole dreams away from the so called favourites,” he continued. “Boxing has always been fun to play – and alot people ask why the change to other combat sports, it was really for my own satisfaction, my enjoyment I get from competing.”

“I’ve won a few titles in kickboxing and MMA but if I win on Wednesday night, it’ll be just another belt for my collection.”

“The fight against Joel Casey was just another fight in my eyes. I got the win and after the fight I got told I was losing,” Mulivai explained.

“It was strange really – because not a lot of Joel’s punches landed – or so I thought anyways,” Mulivai said. “The best thing about the win was proving the so called experts in the game wrong. They were saying I should really have a warm up fight and that he (Casey) would be too strong for me, this and that kind of rubbish.”

“But, little did they know I was fighting for world titles in kickboxing – against legitimate world champions – so I was far from being inactive. I knew for me to bounce back into the boxing scene, he was the opponent for me. I did what I had to do to win, I got the win and now Im just focusing on the future.”

Mulivai’s power, in particular his devastating left-hook, has lead many industry insiders to believe he may cause an upset, in particular leading Queensland promoter Angelo Di Carlo, who has touted Mulivai as pound-for-pound the biggest puncher in Australian boxing. While he was flattered by such claims, a confident and self-assured Mulivai was gracious in receiving praise from such a respected and influential figure in the domestic circuit.

“Thanks to Angelo for the number one ranking. I appreciate it, but my answer has always been this, if I land with either hand, you’re visiting the stars.”

A major talking point in this fight has been Mulivai’s inactivity, or perceived lack of rounds into what is without a doubt the biggest fight of his career thus far. However, when asked about his activity in mixed martial arts and whether or not it was a negative aspect in terms of his preparation, Mulivai gave little credence to such theories.

“I really enjoy MMA, hopefully for those watching, I don’t take Carr down and choke him out,” said Mulivai jokingly.

“For me, training prep is done out of three gyms, I do my striking training at Cross City Fit Wooloongabba with Coach Dim while my wrestling and Brazilian Jiu-Jitsu is done at Infinity Martial Arts in Springfield with my instructor Craig Cochran. The rest of my training has been out of the All Dae Combat and Fitness Gym.”

A confident Mulivai truly believes he has the ability to cause a dramatic upset on Wednesday night and in the process unseat a fighter in Jake Carr, who many see as the future of Australian boxing in the coming years.

“A win for me next week means I get a nice green belt for my kids to play with as well as for my career in the sport,” he said. “I’ll take each day as it comes – win or lose – but a win next week sounds very, very sweet.”

Aus-Boxing.com@ausboxing
554 Following 7.0K Followers
Weekend whips.#ozboxing #boxing https://t.co/2EWY39Xcfz
1 day ago
18
Telegenic bantamweight @JasonMoloney1 could be challenging for a world title as soon as September.#ozboxing #boxing
2 days ago
7 42
The opportunity for immediate revenge.Former super flyweight titleholder @AndrewMoloney has announced a contracte… https://t.co/MNiwtqWrTX
3 days ago
5 38