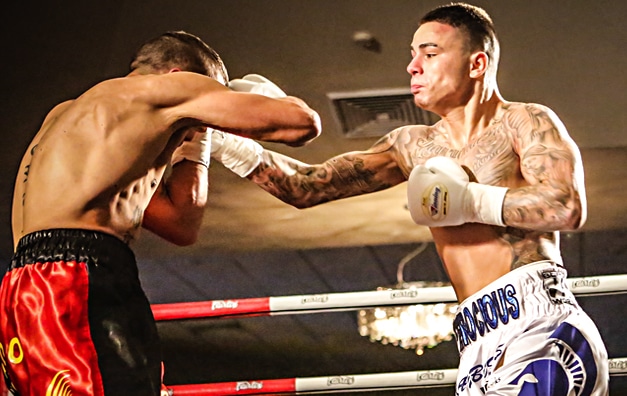 IN only a handful of fights, George Kambosos Jr has marked his name as one to watch.

The popular Sydneysider added the national title to his collection of belts with a one sided shutout over reigning Australian lightweight champion Robert Toomey last month.

Over the course of ten rounds, Kambosos never looked troubled in taking his record to 6-0 (3 KOs) and claiming the biggest scalp of his professional career in Toomey, a multiple holder of the Australian title.

Kambosos, 21, who is already a popular star in his Sydney, bringing an army of hundreds to watch him fight, as he hopes to line up higher profile fights in the not so distant future.

Judges Brad Griffiths and Ray Wheatley scored a near shutout at 99-91 each for Kambosos, while the third and final judge Ray Reed scored the fight a closer 97-93.

“I was very happy with my performance against Toomey,” said Kambosos in an exclusive interview with Aus-Boxing. “I knew he was going to be tough and very durable but we executed or gameplan perfectly, broke and picked him apart round by round.”

“I know my ability and backed myself as always through preparation and the whole fight, I rated my performance after the fight as a seven or eight,” Kambosos continued. “There is plenty for me to still learn as I’m only twenty one, we will keep working hard and make more noise as my career grows.”

In the end, Kambosos was simply too young, too fast and far too determined to allow the defending champion and veteran to pose any kind of threat to his fledgling career. In spite of his total domination of the fight, Kambosos was unable to replicate the fellow prospect Valentine Borg in scoring a rare knockout win over Toomey.

“Two days after the fight we were back in the gym like always. I plan to have one more fight this year hopefully late November or December,” he continued. “We are still not sure if we will defend or move onto a regional title but whatever comes our way we will be ready and continue on our winning ways.”

For Kambosos, the successful transition to the paid ranks has come as no surprise. Despite his young age, Kambosos sports the resume of an experienced veteran having travelled the world as an amateur to compete against high level competition.

“I’ve had a huge amateur background and my style in the amateurs was really always suited the professional ranks, so moving into the professional ranks was nothing new to me,” Kambosos explained. “I had one hundred amateur fights for eighty five wins and twenty six knockouts and I’ve travelled around the world to Russia, Ukraine, Armenia, America and fought every style that was thrown at me,”

“I was the New South Wales state champion seven times and won the national Golden Gloves fives times too,” he continued. “I was the Bronze Medalist at the Arafura Games and I missed out on the 2012 Olympic Games on a count back draw against Luke Jackson, who went on to captain the Olympic team.”

“I’ve now had six professional fights with three knockouts, winning the New South Wales state title in my third fight – and now the Australian lightweight title – so we have taken right steps and progressed perfectly.”

The win over Toomey, which now serves as the marquee win of his short career, has provided Kambosos with a solid foundation in which he hopes will only grow as his career progresses with time.

“The ten rounds were very comfortable for us as my style is suited for the longer rounds. I was happy to prove a lot of critics wrong, especially those that said I was taking this fight too early.”

“Toomey was experienced and he’s had a lot of tough fights, we watched a few tapes on him and we found a lot of weaknesses in his game which I feel like I exposed,” Kambosos explained. “I respected him as the current champion but it was time for the young twenty-one year old ‘Ferocious’ Kambosos to take reign and become the new champion.”

As much of his success comes from his ability to expose weaknesses in his opponents makeup, Kambosos rightly credits his team for their ability to keep him on track as well as manage his growing fan base, which could be one of the biggest in Australian boxing.

“I have a great team with my head coach Igor Golubev, strength and conditioning coach Chris Bakis and cutman Mark Gambin. My dad Jimmy is also involved, he overlooks and manages the team. I also have a financial and media assistant in Spiro Markopoulos, in addition to twenty five sponsors who back Team Ferocious.”

In addition to his team, Kambosos cites local boxing identities such as Kostya Tszyu as well as some internationally recognised fighters as influences on both his boxing career and fighting style.

“Training alongside and out of the legendary Kostya Tszyu definitely influenced me. His style influenced my explosive style in the way I fight, I also have idolised Miguel Cotto and Adrien Broner with their explosive fighting styles and I’ve tried to emulate that into my own way of fighting.”

“I’m Australian born with Greek background, and when I jump in that ring I feel I become a Spartan warrior and as the Spartans from ‘300’ fought ferociously against anyone – I feel like I am the next one doing it – but in the modern generation. I’m very proud to fight for my country Australia as I represented in the amateurs and proud of my Greek heritage as well.”

“My team and myself are very confident that we will make some serious noise and move onto the world ratings. I’m young, hungry and bringing alot of entertainment to Australian boxing.”

By his own admission, Kambosos is new to the professional circuit and is taking his time, developing his craft and learning the ropes. However, if his career continues to grow at this remarkable rate, it won’t be long before Australian boxing becomes very familiar with the confident, brash and newly crowned Australian champion.

Aus-Boxing.com@ausboxing
554 Following 7.0K Followers
Impressive hand-eye coordination from @Tim_Tszyu.The unbeaten star sharpens his reflexes ahead of August 26.… https://t.co/cx1DEtfuPj
1 day ago
5 10
"@Tim_Tszyu is the champion of this division."Manager Glen Jennings offers his take on the prolonged walk-out sag… https://t.co/qvKCBVYx7b
2 days ago
7
The public voted — and the results are in!@Tim_Tszyu and promoter @mattyrose01 discuss the overwhelming feedback… https://t.co/M73IQ3l1PW
2 days ago
2