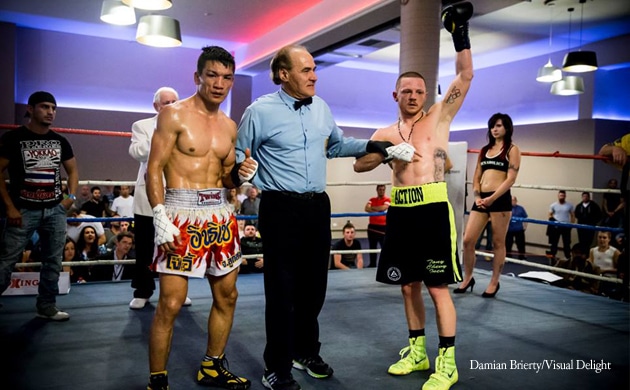 Jackson, 29, had to put up with some resistance from a motivated and upset-minded Afghan, who accepted the unlikely task of beating Jackson on 24-hours notice after several opponents declined the opportunity.

For the most part, Jackson (6-0, 3 KOs) had his way with Afghan (0-1-1) – working behind a darting left jab – which jolted Afghan’s head back multiple times throughout the fight.

The hit out served its purpose for Jackson, who was making his return after a seven-month layoff due to a hand injury he endured in his last fight, a second round stoppage over debutant Sam Rogers.

“I’m happy with my performance considering what happened the week of the fight,” said Jackson post-fight in an exclusive interview with Aus-Boxing. “The change of opponents, as well as the change of weight from 57 to 60.”

“A lot of things went wrong but I relied on my amateur experience to stay focused and get the win.”

Jackson also made a point to highlight the work behind-the-scenes of his head trainer Billy Hussein, who has trained the travelling Tasmanian since his professional debut last year.

“Billy is a great trainer and a great role model, he not only has helped me with my boxing but also life outside of boxing,” Jackson explained. “He has taught me to slow down and to take my time to adapt to the professional style.”

“I am always learning in the gym at Bodypunch and I love it there.”

To his credit, Jackson is strictly business. For a fighter that had dealt with several lingering issues in the build-up to his most recent fight, most notably the inability to secure an opponent until the day of the fight, Jackson’s attitude is one of solitude.

“In this game, there are no easy fights,” Jackson admitted.

“But I believe I win my fights in the preparation. I work extremely hard in the gym and I push my body to the limit every day, so I’m always confident on winning.”

“I’m boxing again on November 24th in Melbourne, which will be over eight rounds at featherweight. After that, I am hoping I can get my chance to fight for the Australian title, which is all that is on my mind.”

Aus-Boxing.com@ausboxing
589 Following 7.3K Followers
RT @ben_damon: It’s #TszyuHogan fight day! Join me for prelims from 6pm AEDT on @FOXSportsAUS 503 and the main card from 7pm on @MainEventT…
2 years ago
8
Former stablemate @jeffhornboxer has backed @dennis_h_hogan to upset Tim Tszyu in Newcastle. #ozboxing #boxing
2 years ago
1 12
RT @CorbinMiddlemas: .@jeffhornboxer joined me on Corbin & Ben to preview #TszyuHogan... timeline on when he’d have to return to the ring t…
2 years ago
2