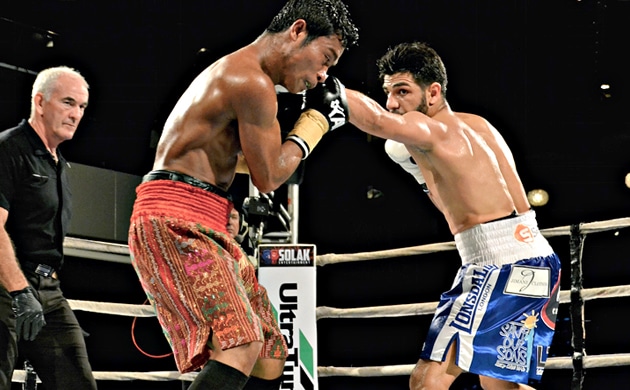 IT may have taken just over a decade to occur, but Billy Dib’s debut in Melbourne was nothing short of impressive.

On a drip and in hospital less than twenty-four hours earlier, Dib entered The Melbourne Pavilion and put on a boxing clinic, before ending proceedings with an eighth round knockout over durable Indonesian Ruben Manakane.

A flashier than expected Dib (38-3, 22 KO KOs) dominated the fight quite literally from start to finish. From the beginning, a confident Dib was throwing hard combinations and fought primarily with his hands by his side, regularly turning Manakane (14-12-1, 9 KOs) and knocking the visitor’s head back with powerful jabs.

By the time the fight had been called, Manakane’s face offered the image of a fighter that was clearly outclassed. The heavy swelling around his eyes was caused by Dib’s varying attacks.

The former IBF featherweight champion showed he is levels above most if not all fighters in this region, taking his time and showing a mixture of attacking styles, not seen in his previous fight with Alberto Garza in July.

“Basically, I came out and tried to establish a good distance and use my jab, I knew his only chance of victory was to land a haymaker, a overhand right or a left hook.” said Dib in his exclusive post-fight interview with Aus-Boxing. “I was being cautious, watching out and being clever behind a fast solid jab and I used it to set things up,”

“I always knew the end was going to come, but I just wanted to take my time in doing it. I was able to work on certain things that I’ve been working on in the gym.”

Despite fighting in front of a Melbourne crowd for the first time as a professional, Dib, 29, looked very comfortable, showing flashes of the confident and brash fresh-faced youngster that burst onto the scene a decade ago.

“As you saw I came out a bit more flamboyant than what I’ve been in the past,” Dib continued. “This allowed me to be relaxed and not get hit as much, which I think I was able to accomplish tonight.”

“I got through the fight unscathed and I’m pretty happy about that and I’m glad I was able to execute what I’ve been working on in the gym.”

“Tonight felt amazing – even though Melbourne is not my hometown – I love Australia,” Dib explained. “To be in Australia fighting again, it makes me feel so comfortable not having to travel so far.”

“I was able to have family and friends here, which was really important to me.”

Unbeknown to most, Dib spent the night of the weigh-in at a local hospital as his body struggled to recover from a bout of the flu earlier in the week. In spite of this, Dib displayed the maturity of a consummate professional and did not use it as an excuse for any flaws in his performance.

“I was really sick in the lead up to this fight, it was meant to be for the PABA title but it didn’t end up going through.” Dib said. “I was actually on a drip last night. I didn’t tell anyone. I was in hospital and out off my feet. But I decided I wanted to fight. That was the reason I boxed a lot smarter and didn’t want to get caught with no lucky shots.”

While no paperwork has been signed, it appears likely that Dib will fight one more time this year, with a potential fight in Sydney that is tentatively scheduled to take place in December.

“I’ll have to go back and speak to SMS Promotions and 50 Cent about that, the fight would be in Sydney if it does go ahead.” Dib said in closing. “The next one will be definitely a much better opponent. I’ll be looking for someone with a much better record and a step towards another fight.”

Aus-Boxing.com@ausboxing
589 Following 7.3K Followers
RT @ben_damon: It’s #TszyuHogan fight day! Join me for prelims from 6pm AEDT on @FOXSportsAUS 503 and the main card from 7pm on @MainEventT…
2 years ago
8
Former stablemate @jeffhornboxer has backed @dennis_h_hogan to upset Tim Tszyu in Newcastle. #ozboxing #boxing
2 years ago
1 12
RT @CorbinMiddlemas: .@jeffhornboxer joined me on Corbin & Ben to preview #TszyuHogan... timeline on when he’d have to return to the ring t…
2 years ago
2
View Comments (0)