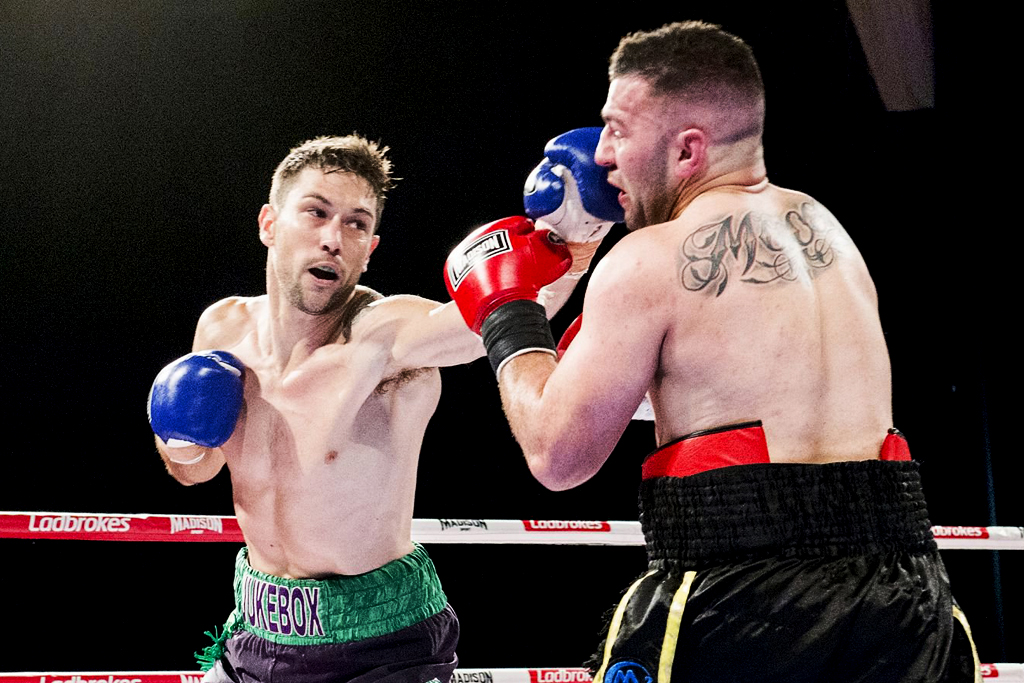 IF setbacks pave the way for comebacks, Sam Banney is on the verge of something big.

The dexterous Banney, a stablemate of WBO welterweight champion Jeff Horn at Glenn Rushton’s Stretton Boxing Club, is looking to secure the biggest win of his fledgling professional career when he challenges the long-avoided Faris Chevalier for his Australian super middleweight throne at the Brisbane Convention & Exhibition Centre on Saturday night.

After a pair of ill-fated meetings, Banney (8-2, 5 KOs) and Chevalier (11-1, 7 KOs) will finally collide on one of the biggest cards of the year, headlined by popular relocated Irishman Dennis Hogan’s unofficial world title eliminator against Japan’s Yuki Nonaka, promoted by DDP Sports Management.

As Banney admits, a fight with crafty southpaw Chevalier has been in the works for some time.

“I’ve been looking for this fight for a while actually,” said Banney to Aus-Boxing. “Having the Australian title is something I’ve wanted for a couple of years now, I was going to fight Faris once or twice in the past for it. But he’s had a few injures so it’s finally good to have it locked in.”

“I’m really excited to get in there, stylistically I think it’s a pretty good match-up. I think we both think that – it will be much like a chess game I think – there will be a lot of thinking involved in this fight. It suits me, I’m just looking forward to getting it on really.”

Banney hasn’t fought since suffering the second loss of his professional career, an eighth round stoppage loss at the hands of former Commonwealth Games representative Nathan McEwan, in a fight Banney was winning for the Queensland super middleweight strap.

Boxing is said to be a thinking man’s game, and for that reason, Banney believes he shouldn’t have fought on that night as he wasn’t fully equipped to face McEwan, especially with the Gold Coast southpaw stepping in at short notice.

“Mentally I wasn’t prepared for that fight, I didn’t want to fight,” he explained. “I was meant to fight Faris actually – they pulled the pin – I was told I was to fight McEwan. I thought at the time McEwan was someone I wanted a full campaign to think about and train for. It wasn’t a good idea at the time to jump in with two weeks notice.

“Even though I was fit and ready to go, I just didn’t like the fight. I think that’s just how it played out. I won the first few and then he just sort of came over the top and caught me in the last round. So I’ve learnt not to get in there unless I’m fully prepared. I am for this one so I’m looking forward to it.”

Chevalier, 30, has been long touted as one of Australia’s most avoided fighters. With comprehensive wins over Reece Papuni, Luke Sharp and Tej Singh in his last three outings, it’s easy to see why few are lining up to face the Frenchman.

Saturday night’s challenge is clearly an uphill task for Banney, who has labelled Chevalier as “awkward”, concedes that he needs to be on task for every minute of the fight if he plans on leaving the Brisbane Convention & Exhibition Centre with his second professional title.

“Faris is very awkward to his credit and I don’t mean to downgrade him,” acknowledged Banney. “An awkward fighter is a good fighter. A lot of people have told me I’m awkward and I’m willing to take that on board as a complement. He brings punches in from all sorts of different angles.”

“He has a really good left hook and power hand uppercut. So if you get lazy on your way in – that uppercut catches you – and that’s not something I want to try out. His style is what I’m going to have to overcome to beat him, but I feel good and mentally I’m ready. Everything has lined up perfectly I cant wait to get it on.”

Tickets for “It’s Time” are available from Ticketek.com.au starting from $59.10. The card will be broadcast live and free on Epicentre.TV beginning at 7:00pm (AEST).

Is Anthony Mundine our greatest ever dual sportsman?