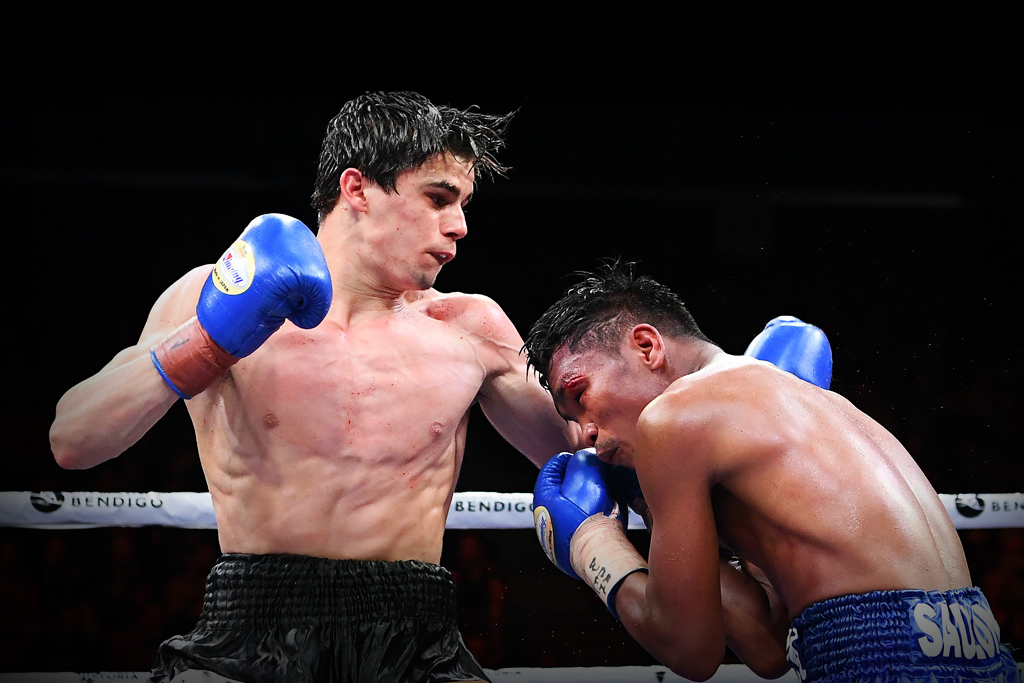 AS the dust settles on the ‘Battle of Bendigo’, a developing storyline that has emerged is the arrival of hard-hitting prospect, Brock Jarvis.

And while his impressive run of stoppages may have ended at Bendigo Stadium, his reputation as a future star has reached new heights, according to leading broadcaster, Ben Damon.

“What a great story he is, Brock Jarvis,” Damon told Hurt Business Radio.

“What a performance that was against Ernesto Saulong, who as I mentioned in commentary, fought for a world title and gone the distance a year prior.

“Jarvis got hurt a couple of times, there’s no doubt about that, he was wobbled. He just gutsed it out, he is just something else.”

Despite his long frame and apparent advantages in both height and reach, Jarvis (17-0, 15 KOs) could develop into a a world level threat at a higher weight.

As shown in his hard-fought decision over Saulong (now 22-5-2, 9 KOs), the Sydney resident lifted when faced with adversity for the first time in his professional career.

“I don’t know how long he can keep getting to that weight,” added Damon.

Thanks to my team, sponsors and supporters

“There’s nothing of him, but his hands are incredible. He boxed so maturely, that was a star-making performance. He went to a complete different level, he punches so well to the body.

“He throws such combinations, he turns opponents on the ropes so well. He’s got that Jeff Fenech killer instinct in him.”

Damon went as far as labelling Jarvis as a future star for Australian boxing, which is already reaping the benefits of Tim Tszyu manifesting into a genuine pay-per-view attraction.

“He’s got star all over him,” he quipped.

“Given the way he looks, having Fenech there, the way he fights, he is something else. If the main event hadn’t been so dramatic and with a star made in Michael Zerafa, there would’ve been even more coverage on Brock Jarvis.

“There’s been plenty, but his performance was a show stealer on any other night, it was really special.”

Damon’s thoughts were backed up by world rated super middleweight Jayde Mitchell, who praised the tenacity of the softly spoken 21-year-old.

“Brock is so long for the weight, at times he crowds his work,” added Mitchell.

“You’d think a fighter with that physique would be on the outside boxing, he’s just Fenech, he’s an animal. He just keeps coming forward. We’ve got one, that’s for sure.”