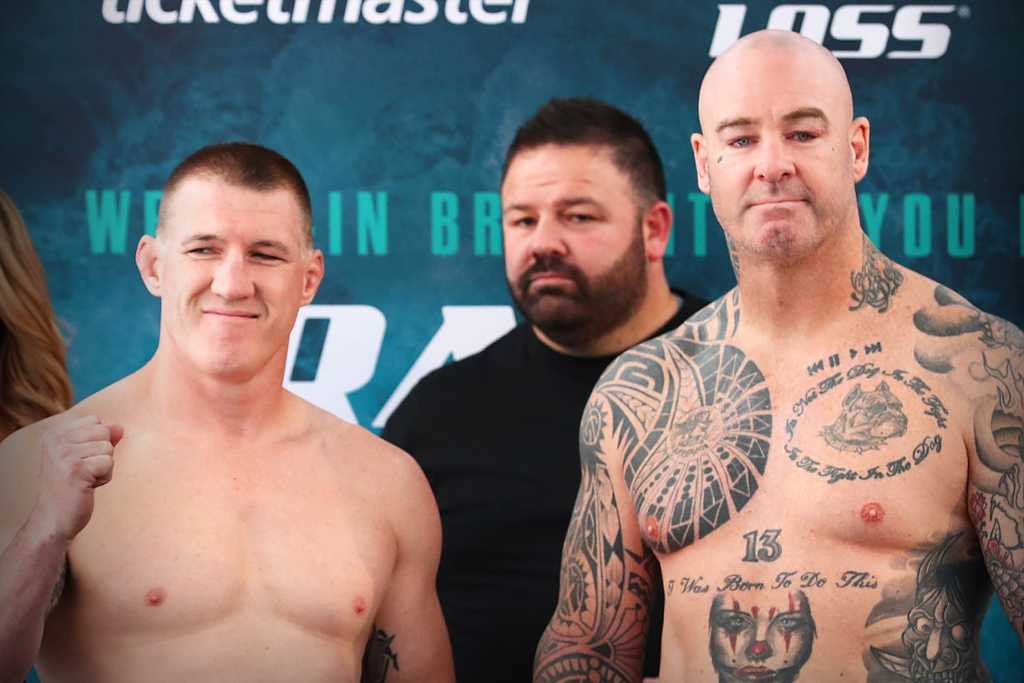 The heavyweight pair will meet in a six round non-title fight, topping another stacked offering from No Limit Boxing, this time from the WIN Entertainment Centre in Wollongong.

We spoke to a slew of industry experts to get their opinion on this pay-per-view blockbuster.

But I’m backing Paul Gallen to get in, make it close, stay on his chest, and make it a fight on the inside. I think he gets it done.

Gallen W6 Browne: I like Gallen’s work-rate here. I think he wins over six.

Browne KO Gallen: Brown by knockout in the middle rounds.

Lucas has too much experience at the top level against top level fighters.

Browne W6 Gallen: I think Browne should win, being a former world champion and with the boxing experience he has. However, you can’t write Gallen off, he’s tough as nails.

Gallen W6 Browne: Gallen really shouldn’t be in there with Browne, but he’s such a hard worker and will be right in there.

Browne has the experience and power, if Big Daddy hits him clean he’ll put Gallen away. But I’m a big believer in hard work, which will get him over the line. I’ll go for the upset and pick Gallen.

Browne KO3 Gallen: Tonight’s card is one of the best I’ve seen in a long time. In each fight you can make a case for either guy.

The main event has everyone talking. Obviously I’m biased but I can’t see past Big Daddy. His right hand catches Gallen at some point and Lucas’ finishing ability is second to none. Once you’re hurt, you’re out.

Gallen W6 Browne: This is an intriguing fight between Paul Gallen and Lucas Browne.

Aside from Browne landing a good clean shot, I believe that Gallen will have the work-rate, inside work, fitness and tenacity to surprise Browne and beat him.

Gallen W6 Browne: If Gallen can avoid being caught at range, I think he pulls off a points decision.

I’m on the fence with this one, especially given it’s only six rounds. I’ll go with Gallen via decision.

Browne W6 Gallen: Browne should win, but it will depend on what Browne shows up.

He could be there to win, or just get a payday. I’m tipping Browne on points.

Gallen W6 Browne: This is definitely a fight that could go either way. Browne has the power to knock Gallen out but I see the six round distance really favouring Gallen.

I think Gallen will be far too busy for Browne, and will out work him to win by unanimous decision.

Gallen W6 Browne: I’m picking Gallen to outwork Big Daddy over six rounds. But if Lucas manages to catch him, it’ll be all over.

Browne KO Gallen: I think Browne is too big and experienced for Gallen.

If Browne hurts him, he’s not getting let off the hook this time, and he’ll finish him off.

Gallen W6 Browne: Having had some experience with Lucas, you can’t deny his world level knockout power.

He needs to get aggressive to take Gallen out within the first two or three rounds. Otherwise, Gallen will win on points by sheer work-rate.

Gallen D6 Browne: No idea at all. I was pumped for Gallen taking a hard fight and saying all the right things.

But Browne is punching hard and it could easily be stopped by him. Draw.

Gallen W6 Browne: Because it’s only a six-round fight, Gallen won’t go in the trenches.

He’ll box and move and get a decision. If it was over ten rounds, it’d be a different story. If Big Daddy wins, it’s by knockout, or Gallen points for me.